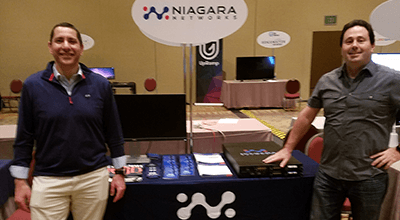 Recently, we attended CableLabs Winter Conference at Rosen Shingle Creek Resort in Orlando, FL. The event was flowing with Cable Operators, CableLabs’ employees, and vendors (like us). It was a great chance for the operators to come together and discuss innovations in the cable space, as well as to network with fellow peers. Additionally, the conference was packed with exciting and thought provoking content. Speeches included the keynote speech by Phil McKinney (CEO of CableLabs), the Dark Web themed panel,, as well as "A conversation with Michael Powell" by the CEO of NCTA.

First off, the weather was amazing with highs of 78 and sunny, and the venue was immense and beautiful, like something out of Las Vegas. The food was top-notch, and if I had to pick, my favorite was the Swordfish we had for lunch on Tuesday. The show was attended by roughly 300 people. Many major vendors were represented including Cisco, Fortinet, Perftech, Sandvine.

I had the chance to sit through a number of the talks and here were my highlights:

All in all, this conference was a great way for us to learn about Cable industry trends, catch up with current customers, and connect with other cable operators. Check out more photos from the event on Facebook.